Back to Notes Index

These series of posts will be a working reference for my growing knowledge of the C programming language. I recognize that as I develop my fluency of the language, concepts will be reworked in my brain and restructured to fit my growing frame of reference. But, these posts will reflect my thought process at each stage of the long journey. This will act like a digitalized personal notebook.

The notebook will address everything I know about C, starting with the first logical starting point. So, without further introduction, let’s start at the beginning.

Every programming language has a way to handle a computer’s memory. Naturally, the first question to ask then is, how does C handle memory?

The typical representation of how a C program handles the layout of memory consists of:

Visually, this typical representation of a C program looks like this: 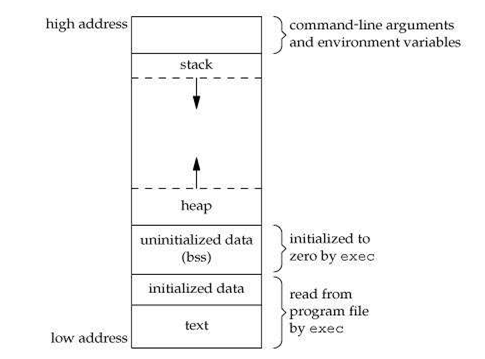 Each of the basic data types in C take up a physical location in this memory layout. I say “physical” because the data types are, indeed, physically represented as bytes in the machine (bytes are one of the basic units of digital information). For instance, if the programmer creates an integer (int) in a C program, that int actually takes up 16 bytes of physical space in the computer’s memory. Those 16 bytes of space now belong to the int that the programmer has created. That space in memory is real and has what’s know as an address. The address can be referenced throughout the program. That space in memory belonging to the int can also be given a value. That given value will live at the int’s address. The value can also be referenced throughout the program.

Each of the basic data types function the same way in C. They all take up a physical location, or address, in memory, and the programmer can reference that data type’s address or value throughout the C program.

Pointers in the C language are notoriously difficult to understand for new programmers. Pointers honestly took me months to really figure out, and even today, I sometimes have to pause and clear off a few mental cobwebs when I try to conceptualize them. However, with a little bit of explanation, the concept of pointers eventually makes sense (sort of).

Also note that a pointer declaration in C looks like this:

This means that p is a pointer to an integer.

There are two operations in C that are commonly used when working with pointers.

Because a pointer is merely a reference to a specific memory location, and not a basic data type itself, a pointer will take up less space in memory. For instance, in the example above, our pointer p is stored in a single byte, but can be used to point to the address of an integer, which may take up 16 bytes.